The lone wolf is weak, the wolf pack is strong. This thought seemed odd. Weakness was not something to be celebrated, it was ultimately something that needed to be dealt with - to be corrected. Instinct tells every creature on this planet that in order to survive one has to fight, to be brave and strong but the implication was dreadful. The world is constantly on the attack, it wants to steal your power, your resources even your life.

It was almost a whim which made us decide to make The Cobbler our first climb of the year. We'd left it late for sure. We're normally out there bashing about the hills throughout the winter but this year was different because of the work we had been doing in the house and my own multiple commitments elsewhere.

I'd spent the previous two weeks feeling pretty poor with a mixture of back pain and virus but the weather gods were smiling today. There was nothing stopping us. Had they not been, weaker motivation may have crumbled but even today with the weakest motivation and the briefest preparation, there was only one outcome.

So off we went. When we arrived we jumped out the car and were so eager to get on with it we even forgot the fruit wed bought specifically for the climb. If you know the path up The Cobbler, you'll know that the first section is a pretty tough, winding slog up through the forests which cover the steep lower slopes of the hill and border Loch Long. It was during this section that I discovered that, despite my porridge breakfast and my sirloin steak/fish finger dinner the night before, I had little to no energy in my body. It was all I could do to place one leg in front of the other for a while but I took frequent rests and somehow managed to slog on. I was gutted. It was a lovely day and Brian (and I) had never seen the view from the top of this mountain without it being obscured by clouds. Today was to be that day, but how. I was exhausted and didn't feel like I had anything in reserve. I promised Id make it to the reservoir by hook or by crook and despite plenty of puffing and wheezing we got there and let the dogs play in the water.

At this point, after a bit of a break, I felt a little better and said I'd like to carry on to the shelter stones and decide there whether or not I could carry on. Once there we made up some energy drink from a sachet and I gulped it down. Again the break made me feel like I could go on just a little bit more so I committed to make it up to the point where the path splits 3 ways to head off for Beinn Narnain, Ben Ime and The Cobbler. As I walked the sugars in my stomach seemed to energise me with every step. I was still hurting but it was becoming less of a problem.

When we got to the 3 way split we stopped again and had a good break. The final and steepest part of the climb loomed above me like a skyscraper but I'd decided if I could make it this far I could make it to the top. After popping 3 dextrose tablets we set off. The final part of the climb is like a long hellish staircase with stones of all sizes making up the crazy paving stairs. It was a tough stretch but, with the help of plenty of breaks and the knowledge we were nearly there, we made it. As you can see from the picture at the top, the views were well worth the slog. Spectacular!

After a linger at the windy top to take in the majesty, it was time to head back down the path to the delights of the chip shop and the chance to undo some of the healthy goodness we'd subjected ourselves to. Well, life is all about striking a happy balance. What a great day!

The North Wind and the Sun

This is a wee story I heard as a child and told to my son this morning after shouting failed to get him up but giving him back his quilt worked just fine.

"I am stronger than you," said the North Wind to the Sun.

"That is not true," said the Sun. "Everyone knows that I am the stronger."

"Do you see that traveler coming? I can make him take off his coat. You can not," said the Sun.

"We will see about that," answered the North Wind. "The one that makes the traveler take off his coat is the victor." "All right," said the Sun, "and you may have the first trial."

At last the North Wind said, "I will try no longer, but you, Sun, can do no better."

The Sun said nothing, but came out from under a cloud and smiled down upon the traveler.

"How good that feels!" said the traveler.

The Sun shone on. "It is getting warm," said the traveler, unbuttoning his coat.

It was now past noon. "The Sun is too much for me," said the traveler, and he threw off his coat and hunted for a shady place.

The North Wind's harshness had failed. The Sun's gentleness had won. 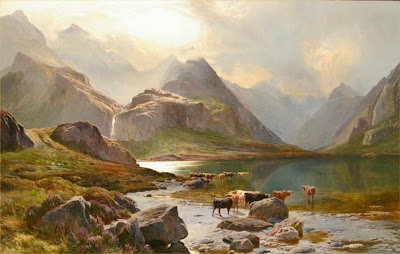